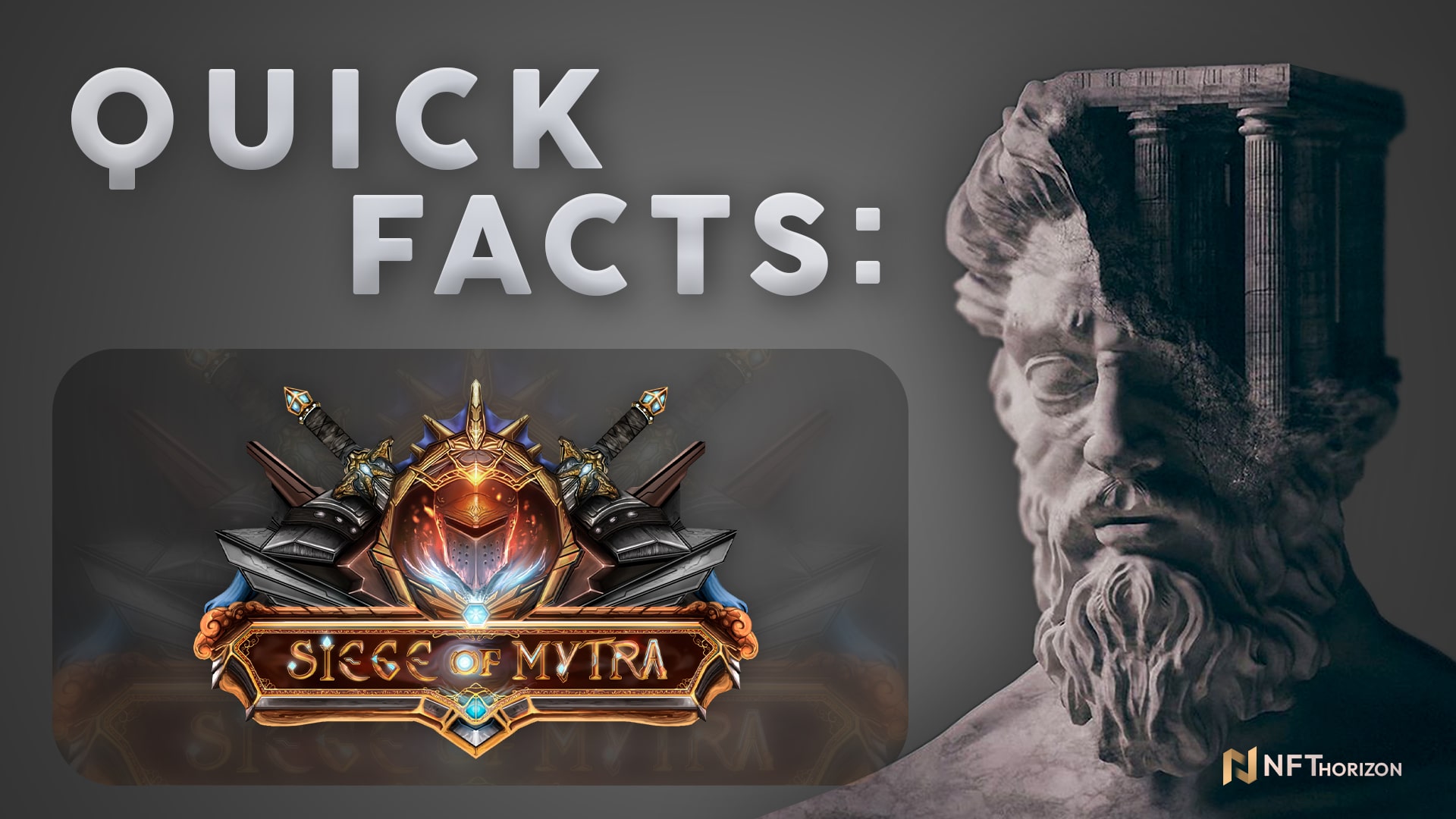 Story of Siege of Mytra

Siege of Mytra is an iOS and Android exclusive RPG strategy NFT game on the WAX Blockchain. The game features classical asynchronous battle on unique play-to-earn and craft-to-earn mechanics that allow players to play, collect, and evolve their reigns to become the Landlord in this fantasy medieval-like world.

In the game, players can take control of their Heroes, build their front of troops and mercenaries, destroy the enemies’ Castles, get resources, and rank on the Siege of Mytra Community Ranking to win prizes on NFTs and $DOBLON tokens.

The slogan of Siege of Mytra is ‘’Produce, grow, battle and smash your enemies!’’.

-Level up the Castles.

-In case of looking for another opponent to the one proposed.

-Acquire power-ups and NFTs in the in-game store.

Generally, players can start an Empire of Castles, fight against other players and steal their $DOBLON, level up their Castles to discover new troops, review their all-past matches to show their communities and friends, and discover a wide range of power ups that will help them to create the best strategy on the battlefield.

-Seasonal rewards based on rank

-New Castles and new Troops based on each race

-Extra new in-game features, such as Avatars, Ranking Matchs, Season Rankings, among others

-Development of map view of Mytra

$DOBLON is the game currency in Siege of Mytra, which will be farmed by players, through their in-game activity and it has lots of uses inside the game such as purchasing for Castles Plot, finding a new battle, paying the Troops and Mercenaries, upkeep and purchase items, and NFT in the in-game shop. There will be a maximum supply of 1.000.000.000 $DOBLON.

Castles pay each turn an amount of $DOBLON per turn depending on Castle level from the Player Reward Pool.

The reward in $DOBLON after winning a battle against another player comes from the same enemy player applying the following formula:

*In the case of Golden NFT from the winner player, this amount will increase +3% per Midas point up to a maximum of +21% extra $DOBLON.

Staking $DOBLON to unlock the Season Battle Pass to get daily rewards. 50% of the $DOBLON stacked is returned at the end of the event and the remaining 50% is burned.

The Salary is subtracted from the expected reward of each turn obtained by the Castle, and if it is not enough, the Troops will desert.

*There will be more use cases for $DOBLON as the game evolves.

Jouse Márquez, who is the CEO of Onikami, has extensive experience in the direction and coordination of projects within the audiovisual world and software development. Also, he is a passionate and geek profile involved in all key decisions from game design and marketing campaigns in Onikami Games.

In addition to the CEO, Ramón López is the CTO, and he has held various positions of responsibility with different characteristics such as a programmer, database administrator, analyst, team leader, and instructor in university-level courses, among other occupations. Furthermore, Carlos Chinesta is the art director, and he has been dedicating himself to the world of photography and professional graphic design for more than 13 years.