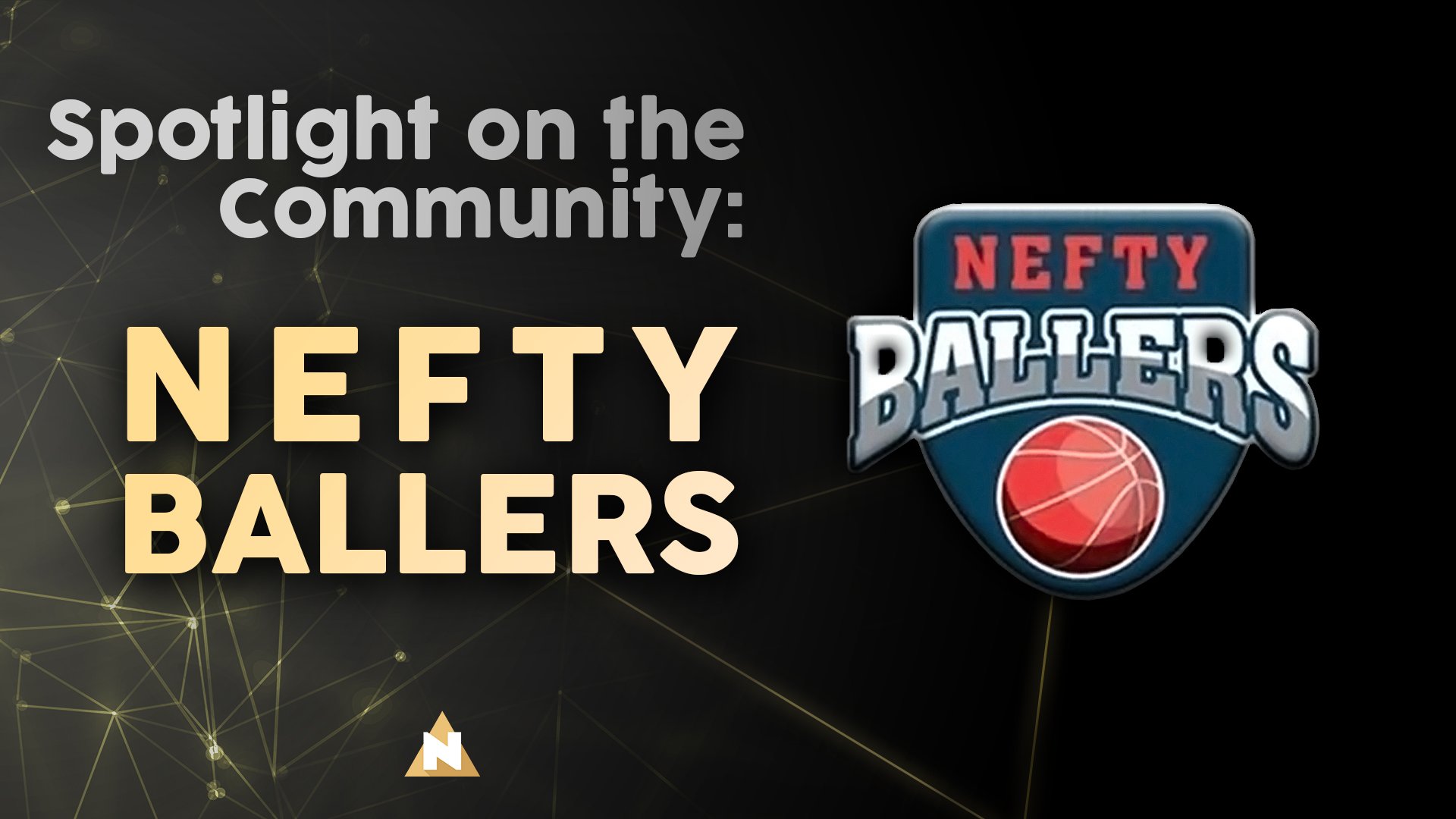 Ahead of the Nefty Ballers 1st Edition Pack Drop, we caught up with founder Pete to discuss the game, land ownership, the pack drop and the path towards creating a true massively play to earn NFT gaming experience.

Tell us a bit about yourself, your background and how you got into NFTs?

I have been a gamer since the 1980’s where I played the Commodore 64, and over the years moved through most consoles and desktops like the Amiga, NES, SNES, and other mainstream brands. Whether it was California Games on the C64 or the latest basketball title, I have always had a love of sports in gaming.

In 2019, I found my kids enjoying physical card collecting, something that I have enjoyed since the days of 1992 Skybox, so I ended up creating Kaboom Cards. Kaboom Cards is an online physical cards shop. Over the past two years I have learned a lot about the physical card market and as prices soared, I found myself questioning the efficiencies and return on investment my collectors could achieve. As this became uneconomical for my customers in my opinion, I wound the business back and started Nefty Ballers, the first of our planned sports NFT games.

Nefty Ballers gives us the opportunity to reach collectors all over the globe with no physical distance limits. Creating an NFT project gave us the use of the blockchain for full transparency on transactions, something that the physical card market struggles with at times. Transparency and honesty are something we pride ourselves on, and this can be observed in our rollout progression and white paper for the Nefty Ballers Project. One of the key collectible traits I wanted for the Nefty Ballers collection was to have full asset utility. I decided on a trading card type game as the first version of gaming for utility. This gives us the opportunity to show case our NFT cards/art, whilst providing full utility for the owners. It is our goal to eventually turn Nefty Ballers and all future NFT sport games into arcade games as well.

Over the coming years, I want to be a pioneer that helps to potentially steer the gaming industry in a way where users have complete ownership over their assets for a game as well as having full cross functionality of their assets within all of our game titles. This will be achieved through the Nefty Blocks super blending options!

The team at Nefty Ballers is based in Perth, Western Australia. We have a global work force based in Indonesia, Pakistan, India, Ukraine, Canada, and the United States of America. We will be utilizing the WAX Blockchain, Atomic Hub and Nefty Blocks for our collection creation and distribution. Our Nefty Baller game title is being created on Unity.

Could you tell us what Nefty Ballers all about?

Nefty Ballers is a sports game that combines blockchain mechanics with web-based gameplay. The game will initially use a simple three-dimensional display built on Unity for the WAX blockchain.

Nefty Ballers is our first game in a series of six games we will be making. It is an NFT collectibles basketball themed game. There will be a trading card version and an arcade version in the future, with the trading card game released first. Over time, users will be able to chose to play the card game or arcade game with the same NFT collectibles, it will be their choice.

How can people play Nefty Ballers?

You will need at least five (5) Nefty Baller Player Cards in your WAX wallet to participate in a game.

The Nefty Ballers game will open a screen (similar to below) in game, where the user has the ability to select five (5) Nefty Ballers NFT Player Cards. These five (5) cards will be your player cards for gameplay.

Users must select their best five (5) cards they feel for the team deck ranking they want to achieve before the match making process begins. Users can select up to five (5) accessory cards to boost their team deck stats, but if a user doesn’t have these, they can still play a game. Accessory NFT cards will be an important part of game play!

Each NFT player card has statistical points which our game accounts for during gameplay. An example of a NFT Player stats can be seen below:

All player stats can be found in our medium article: https://medium.com/@NeftyBallers/nefty-ballers-nft-guide-5c58d37b0098#fbfb

It is important that users think about what play cards they will use, how accessories can boost their stats and what team deck rating they wish to play their game in!!!

The overall stat points for team deck ratings are shown below. It will be up to users to decide what cards they wish to use to play in what team ranking games.

The below table shows the cost of entering a PvP game (one user’s team versus another user’s team), with figures in $USD for ease of reading. The total game pool that either user has the chance to win, the winner of the game’s prize in a US dollar amount (87.5% of the game pool), the possible Baller Token received (future add on) per game, the land (court) fee which is paid to the land (court) owner, the tournament fee which is collected & pooled in total for all games played per Class and becomes the tournament pool which users can win weekly by entering a certain Class tournament and our developer fee for maintaining servers and updates.

There will be various game entry costs, from cheaper entry games to more expensive entry games. A land fee minimum is shown on the table below, the rarer courts (lands) will pay a higher landowner fee.

* Note – USD$ shown for ease of viewing for new users, all transaction will occur in the WAXp token, via your WAX Wallet*

For more details regarding game play see our whitepaper: https://neftyballers.io/white-paper

What platform will Nefty Ballers be playable on?

As we are using the WAX Blockchain, we had to integrate our game with a browser. This was quite a challenge as we have built our game on Unity. We chose Unity to develop the game as it makes our game available on Android and IOS. The number of active mobile gamers worldwide is reportedly over 2.2 billion!!! After much work, we will be able to offer our game to PC, Android and IOS users! Growing the Android and IOS user base is a goal of Nefty Ballers.

We have created a unique land ownership experience; we refer to courts as lands in the Nefty Ballers game.

The below picture shows an example of a Nefty Baller court. Land is displayed in the trading card game as a traditional game mat. The blank spaces are reserved for the landowners advertising space!!

What makes Nefty Ballers land unique is the ability for landowners to advertise on their courts. Landowners can send us a custom banner image that will be applied to their court mat. A landowner has the option of arranging an external agreement for advertising, and we will apply it to their mat. All advertisements will be screened for suitability before application.

A game can be selected on any court a player chooses. This also gives landowners the ability to run external promotions and drive traffic (users) to their court to play, thus increasing their returns.

Nefty Ballers land will be priced at $935USD each. We chose a relatively conservative games played per day model in our opinion and a 3-6 month forward forecast for our price point.

What & When is the Nefty Ballers 1st Edition Pack Drop?

The first thing people should note is that our 1st Edition Player Cards will have higher stats than future standard player card releases. We chose this option to reward our early adopters. Also, of equal importance, is that people should read and understand the potentially game winning use of accessory cards. Accessory card will boost your player card stats in game and could give you that tactical advantage required!!

Our 1st Edition pack drop is made up of 2 types of packs, a standard pack, and an Ultimate Pack.

The Standard packs and Ultimate packs have differing chances of obtaining rarer cards. The common card is the weakest card, and the legendary card is the strongest card. The percentage chance of hitting these cards in each type of pack is in the table below:

Supply and pricing for the two different type of packs is different and can be seen below:

Will you offer blending in Nefty Ballers?

Yes, we will be utilising the Nefty Blocks function of blending for our game. Users will be able to upgrade their common and uncommon cards via blending. Our blended collection is already made, and we aim to turn on blending shortly after our initial pack drop. Blended cards will have slightly stronger statistics than normal cards, an example of a blended card is below:

For a better understanding of how Nefty Ballers blending works, see our medium article: https://medium.com/@NeftyBallers/nefty-ballers-blending-d981a6eb60e

How will Nefty Ballers look in the future?

Nefty Ballers is the first of our of games, it will be a gradually rollout towards the end of this year as we test the game mechanics, introduce the play to earn, turn on Tournament mode, create and add our BALLER Token and introduce fatigue to the game.

Once this is all up and running smoothly, then we will begin work on our arcade version. We want people to be able to choose what version they wish to play in the future, either a trading card game or an arcade game.

On completion of Nefty Ballers, we will aim to begin our next affiliated sports game. It is important to us to have a range of games to play to meet our users’ interests. This variety also enables us to utilise the Nefty Blocks Super Blending option, so all users have cross collection & game utility with our NFTs.