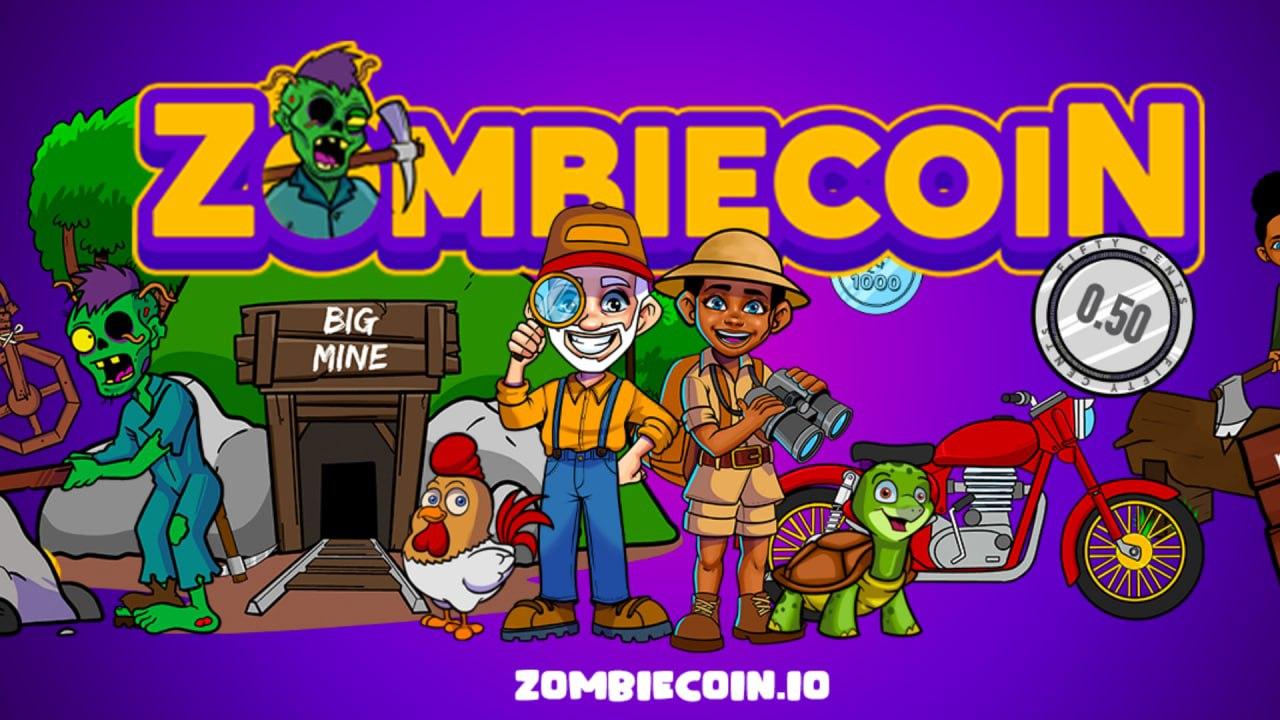 Zombiecoin (www.zombiecoin.io) is an NFT farming, mining & exploring game on the WAX blockchain. The different characters in the game (represented by NFTs) perform work tasks in Zombieland that allow players to collect and gather various NFTs and tokens. They’re gearing up for their first NFT Land Sale on February 12th, which will add a totally new dimension to their already developed game.

What makes Zombiecoin different from other games?

A few things. First of all, at its core, it is a game based around low-cost NFT packs. For players who love opening packs and trying to get lucky, this is the kind of game they’ll enjoy playing since every work task is essentially a very low-cost NFT pack. Prices for packs range from $0.18 USD – $0.35 USD and you can find a wide range of different NFTs inside including Mines which actually pay you $40 USD – $700 USD worth of WAX once the Mine’s reserves are depleted. Second, as was just mentioned, the project actually rewards its players directly with WAX which is something most other games aren’t doing. While other games reward their players solely with assets within their own closed ecosystem, Zombiecoin rewards its top players with WAX and assets from their game!

The game rewards players with WAX when Explorers find Mines and become Mine Owners. Mine Owners allow Zombie Miners to enter their Mines to search for rare NFTs like jewelry, as well as ZBC – the in-game currency. WAX is also rewarded monthly to the top players on the Leaderboards.

Another aspect that community members and players seem to really enjoy about the game is the fact that the community really has a say in the development of the game. Since the game was released to the public in August in what they called their “pre-alpha phase”, the developers have made it a point to listen to feedback and suggestions and implement the most popular ideas presented by its community members. They even eventually plan to implement governance functions for their ZBC token.

ZBC is a fungible token that was recently launched on Alcor Exchange, and it has several use cases. Namely, it is used: as an integral part of most crafting recipes in the game such as Vehicles, Tools, and more, to purchase Limited Edition NFTs from the Exchange Shop, to earn rewards for being at the top of the Leaderboards and more. There are also a ton of future uses planned for ZBC including being used to level up NFTs such as Lands, Characters & Pets, to purchase collab NFTs from other projects at the Exchange Shop, buying Egg Incubators from the Exchange Shop, being an important factor in obtaining the powerful Region Governor, Zombie King, and Zombie Queen NFTs, and being used in many future crafting recipes.

Right now, there are three characters in the game – Villagers, Explorers & Zombie Miners, and each of them is able to perform different work tasks. Villagers are community members of Zombieland who chop trees and gather ZBW. ZBW is a fungible token that represents Wood in the game and is an integral part to plenty of crafting recipes, including being used to craft House Parts, Tools, and Vehicles. Explorers explore Zombieland in search of Mines and other raw materials such as Boots (for Fabric), Broken Bottles (for Glass), and Rocks (for Stone). Zombie Miners are the only characters in the game who can withstand the toxic nature of the Mines, so they enter the Mines found by Explorers to dig out the ZBC reserves found within them. Zombie Miners can also find jewelry in the Mines – Rings, Bracelets, Necklaces, and Tiaras. These NFTs spawn very rarely (all under 0.1%), so they’re extremely rare and valuable. They can be exchanged for high amounts of ZBC, and they also provide a high amount of TAV.

TAV is Total Asset Value and it can be thought of as a player’s in-game net worth. It refers to the total value of a player’s inventory and is displayed on the Leaderboards at www.zombiecoin.io/play. TAV shows how you stack up among your fellow community members. Speaking of community members, one interesting aspect about Zombiecoin is the fact that there will only ever be 10,000 Villager NFTs sold, meaning there is a very limited population who will soon be able to purchase plots of land in Zombieland.

Speaking of Lands, Zombiecoin is actually preparing for their first-ever Land sale which is taking place on February 12th, 2022. Lands are stakeable NFTs that provide players with ZBF/hour as well as plenty more benefits. ZBF is a fungible token that represents “food” or “energy” in the game, and it’ll be used in crafting recipes, and required to perform work tasks and level up characters and pets.

Lands can be upgraded up to Level 4 – to Home, Farm & Lake, which unlocks additional features and increases ZBF production. Having a Home or Farm allows you to harvest Fruits every day. Upgrading your Land all the way up to Level 4 also allows you to go fishing for Fish. Fish & Fruits provide TAV, can be exchanged for ZBF and will be used in crafting recipes! Having a higher level Land also allows you to perform more Pet tasks every day, increasing your resource generation even further.

That’s not all Zombiecoin has planned for 2022, they’ve got lots more in store – they’ll be releasing a fully revamped Game UI, Pets who will provide assets every day, a level-up system for characters, pets and lands, character look customization, and more! They’ve even mentioned a daily/weekly/monthly quest & mission system which will keep players engaged day-to-day, allowing them to complete various tasks in exchange for rewards.

Want to learn more about Zombiecoin? Head over to www.zombiecoin.io, and be sure to join their discord at https://discord.gg/fvRRPJU6mj to stay up-to-date on their upcoming NFT sales and announcements!